On 29 November 1932, at about 6pm: Mr Voisin asks his children Fernande (15 years) and Albert (11 years) to go and look for their sister Gilberte (13 years) at the nearby boarding school of the « Sœurs de la Doctrine chrétienne ». On their way they invite two friends, Andrée Degeimbre (14 years) and her sister Gilberte (9 years) to join them.

The four children, the three girls and Albert, made their way to the convent door to meet Gilberte Voisin, entering the grounds and passing near the railway embankment that skirted the convent garden. Albert after knocking on the door, turned around and with an expression of surprise on his face, looked towards the embankment and cried out: “See! The Blessed Virgin, dressed in white, is walking above the bridge!” The girls looked and could see the luminous figure of a lady dressed in white walking in midair, her feet hidden by a little cloud. 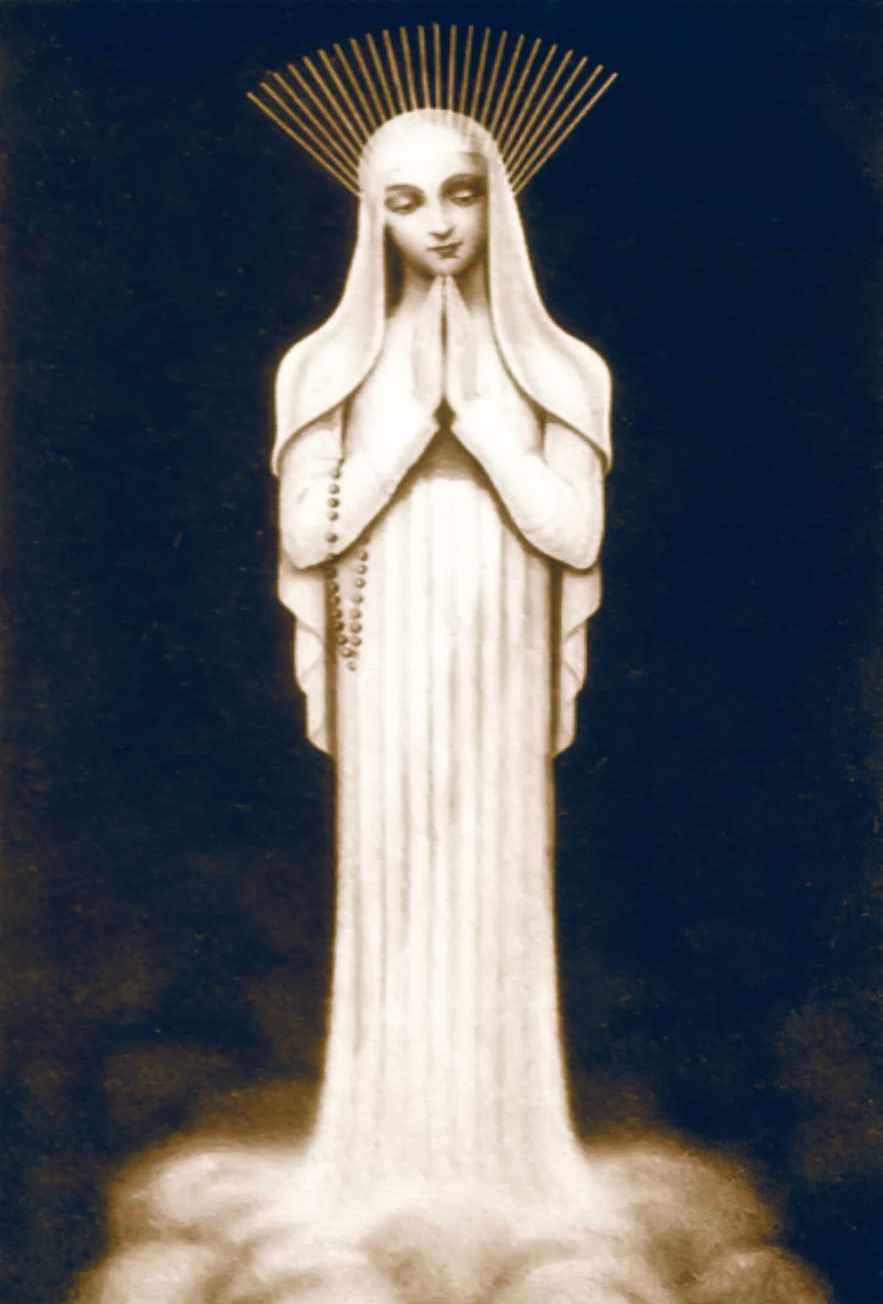 The porter, Sister Valeria, opens the door. As the children tell her they have seen the Virgin, she refuses to believe them and calls all that “nonsense”. Gilberte Voisin, coming from her class, does not know what happens. As she reaches the door she too sees the Virgin on the bridge. With a lot of fear the children run home, nevertheless resolving to come back the next day.

On the next day, 30 of November, the Blessed Virgin appears again on the bridge. On the 1st of December she shows herself, disappears, appears again near the holly (currently the place of the altar) and then comes under a branch of the nearby hawthorn, near the garden gate. There she will appear thirty three times, until the 3rd of January.

She is wearing a long white dress with light blue shades. On her head they can see a long white veil falling on her shoulders. Thin light rays fuse from her head, forming a crown. Her hands are joined in prayer and she smiles. 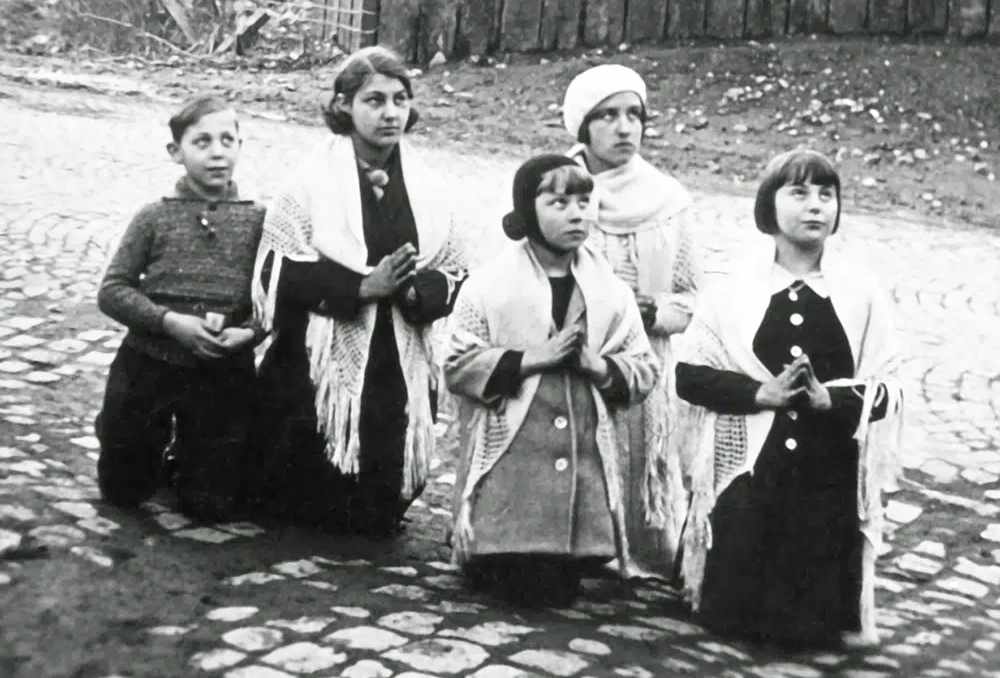 After the Blessed Virgin’s apparition on the evening of 1 December, the local priest, Fr. Lambert, was consulted by the mothers of the children and advised silence, although this naturally proved difficult, as the story began to spread around the town. Next evening, 2 December, Albert asked the Lady if she was the Immaculate Virgin, to which she smiled and nodded her head, and, when asked what she wanted, she said simply: “Always be good”, words which prompted the reply “Yes, we’ll always be good”.

On Tuesday 6 December, the children, at Fr. Lambert’s suggestion, said the rosary during the apparitions for the first time, and were rewarded by seeing a rosary on the right arm of the Lady, a practice continued during the remaining apparitions.

The next evening, the children again saw the Lady, who, they reported, had said nothing, and following this they were examined by four doctors. They testified to their good mental and physical health and the apparent honesty of their answers. They were closely watched to ensure they could not talk to each other, and when each apparition was over, were questioned separately as to what they had seen.

On Thursday 8 December, the Feast of the Immaculate Conception, a crowd of about fifteen thousand assembled expecting a great miracle; but they only saw the children in ecstasy, impervious to lighted matches held underneath their hands, pin pricks, or lights shone in their eyes. One of the Doctors present testified that no trace of any burning was found on the children’s hands, although they should have sustained first-degree burns.

On 29 December, Fernande saw the Blessed Virgin with a heart of gold surrounded by rays, and this was seen by two of the other children on 30 December, as Our Lady repeated the phrase: “Pray, pray very much”, which was only heard by Fernande. On the last day of 1932, 31 December, all the children saw Mary’s golden heart. This has been seen as indicating a connection between Beauraing and Fatima, with its emphasis on devotion to the Immaculate Heart of Mary. 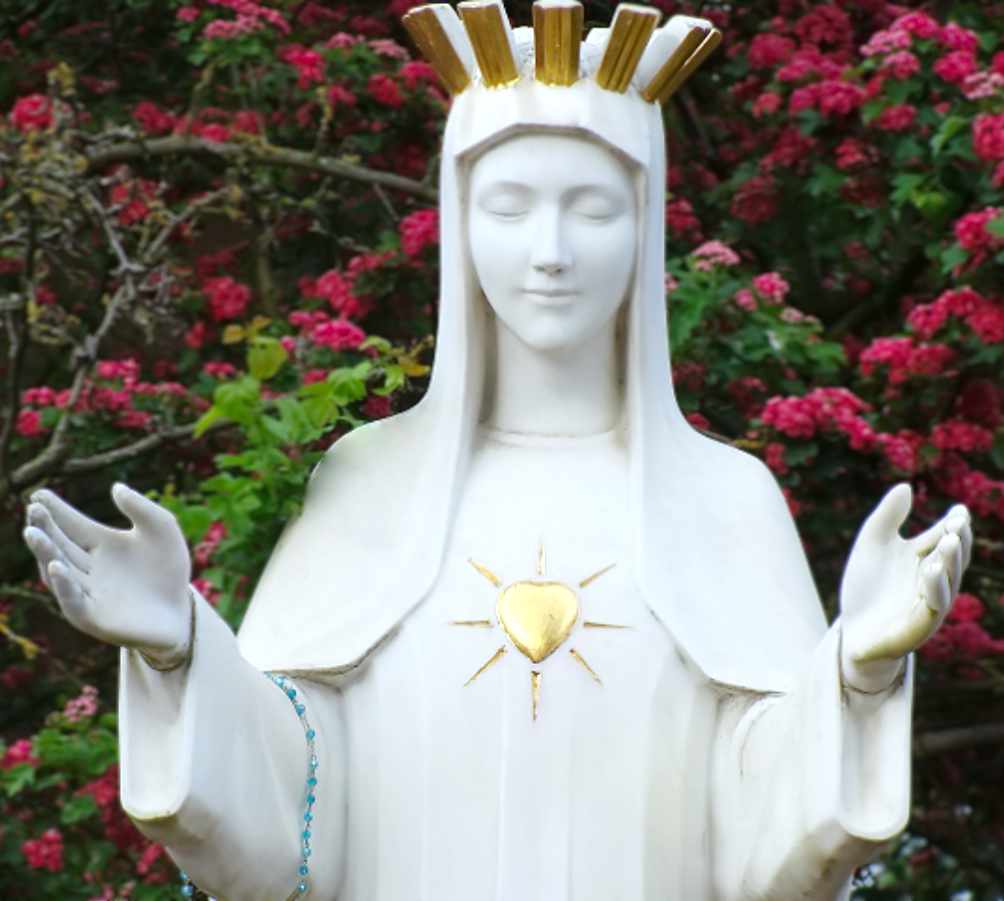 On 1 January 1933, Mary spoke to Gilberte Voisin asking her to, “Pray always”, with the emphasis on always; the next day she told them that on 3 January, at what was to prove to be the final apparition, she would speak to each of them separately. A very large crowd, estimated at between thirty and thirty-five thousand people, assembled that evening as the children began their rosary.

After speaking first to the youngest child Gilberte, telling her a secret she was not to reveal, she said: “Goodbye”. She then spoke to Gilberte Voisin, imparting to her what has been seen as the main promise of Beauraing, “I will convert sinners”, as well as also giving her a secret and saying: “Goodbye”. Albert was likewise given a secret and bidden farewell, while to Andrée she said: “I am the Mother of God, the Queen of Heaven. Pray always”, before taking leave of her in the same way as the others, showing her golden heart before finally saying to Fernande: “Do you love my Son? Do you love me? Then sacrifice yourself for me. Farewell!”.

In the context of what was happening in Germany, with the imminent threat of the Nazis gaining power, we can understand why Our Lady should have been so insistent on the need for prayer.

The apparitions caused immense excitement and debate throughout Belgium, as reports were circulated in newspapers and magazines, with the anticlerical press generally taking a negative line: most of their reporting, though, was shoddy or second-hand, and was countered quite easily. Over two million people visited Beauraing in the first year and there were numerous cures reported. The children all married and had families of their own, trying to keep in the background as much as possible; they saw themselves only as the instruments for making Our Lady’s message known. 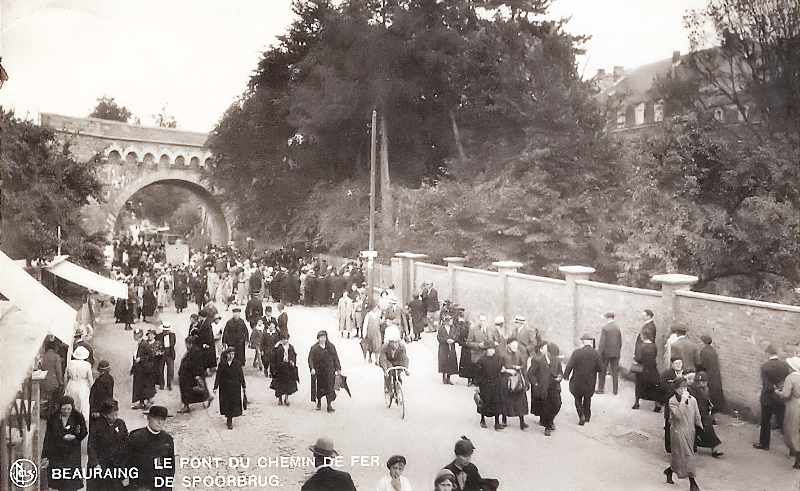 The Bishop appointed a commission of inquiry in 1935, with the work continuing under his successor, but it was not until July 1949 that the shrine was officially recognized and two important documents issued. The first dealt with two of the many cures that had taken place at Beauraing, declaring them to be miraculous. The second document was a letter to the clergy in which Bishop Charue said, “we are able in all serenity and prudence to affirm that the Queen of Heaven appeared to the children of Beauraing during the winter of 1932-1933, especially to show us in her maternal Heart the anxious appeal for prayer and the promise of her powerful mediation for the conversion of sinners”.

The Apparition of Our Lady at Caravaggio

The Apparition of Our Lady at Pontmain

The Apparitions of Our Lady at Pellevoisin

The Apparitions of Rosa Mistica at Montichiari and Fontanelle

The Apparitions of Our Lady at Medjugorje

The Apparitions of Our Lady at Holy Love

The Apparitions of Our Lady at Jacarei