Important appeal to the nation of Colombia!

I urgently need My Beloved Nation, that you awaken from your spiritual lethargy, so that you may carry out together with My other chosen nations, My plan of salvation for these end times! (Read more)

I want My Beloved Colombia, that in the month of June dedicated to honor My Sacred Heart, the entire Colombian Nation consecrate herself to Me, day and night; that your government renew the consecration of My Colombia to My Loving Heart; asking for the cessation of violence, for Peace and protection of My Beloved Nation. I give you this prayer of consecration to My Sacred Heart so that you may pray it day and night.

Prayer of Consecration to the Sacred Heart of Jesus 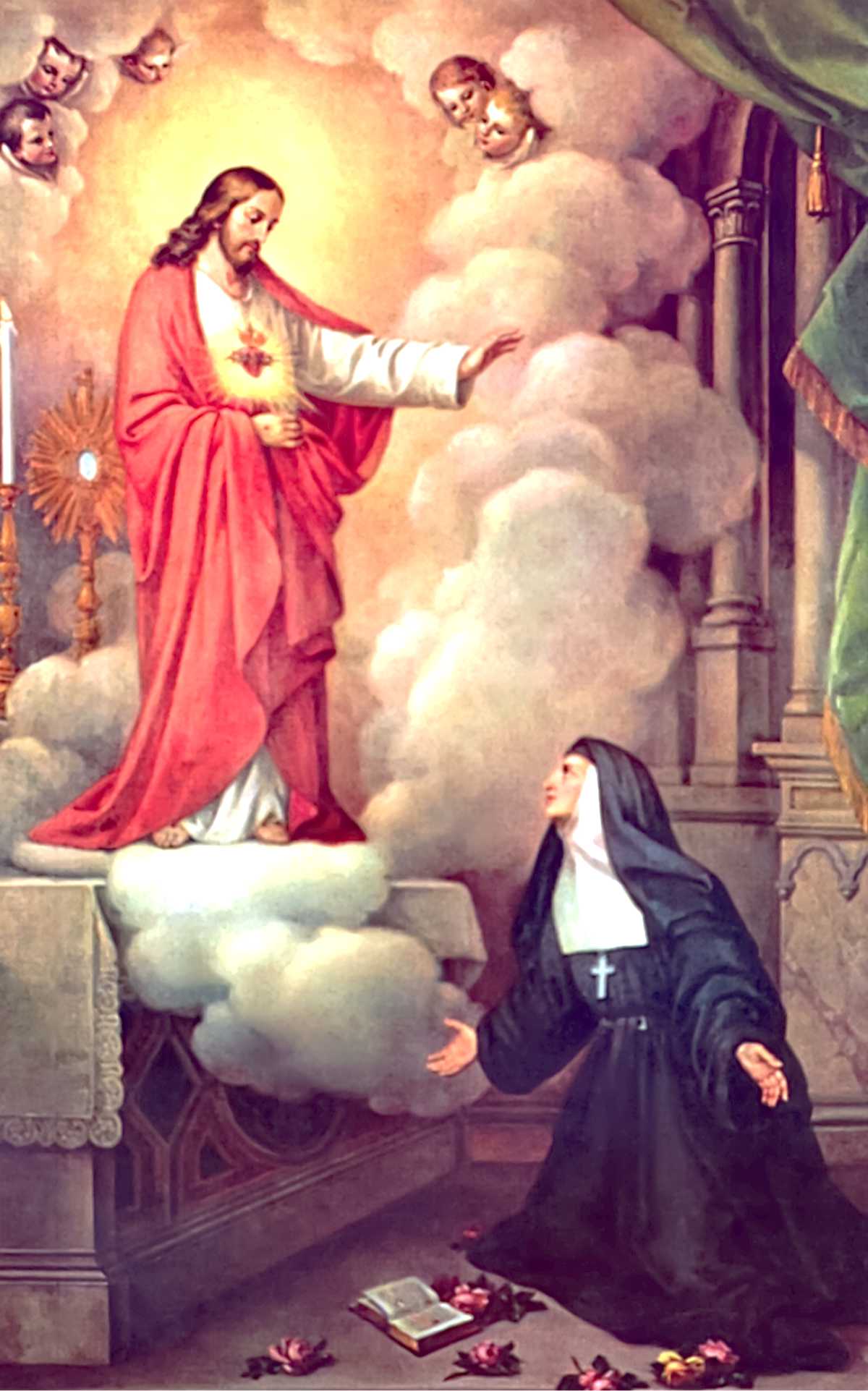 Behold the Heart which has so loved men that it has spared nothing, even to exhausting and consuming Itself, in order to testify Its love.

(Revelation of the Sacred Heart to St. Margaret Mary, June 1675)

A Vocation for Suffering

St. Margaret Mary Alacoque (french: St. Marguerite-Marie) was born on 22 July 1647 at Lauthecourt in Burgundy (France) into a wealthy and religious family.

Hers was an early vocation. In her memoirs, the saint says that already as a child God made her see “the great ugliness of sin, which caused me so much horror that the slightest fault was for me an unbearable torment.” To this was added a great hunger for prayer and penance, allied to a great compassion for the needy and a desire to help them.

As her father died early, her mother Filiberte gave little Margaret Mary to a convent of Poor Clares. Strolling in the silence of the cloister and observing the modesty and spirit of prayer of the sisters, she felt the call to religious life. At age nine she received her First Communion, and her hunger for prayer and recollection increased significantly.

However, falling seriously ill, she had to return to her mother’s home, where a difficult period of trials began. Disease struck her for four years, preventing her from walking. After making a promise to the Blessed Mother, she regained her health but her suffering only changed form. Her mother entrusted her to a cousin who managed the family patrimony, and she had to submit herself to this unsociable and insensitive relative who denied her even basic necessities.

God permitted this to familiarise her with renunciation and prepare her to embrace the vocation of atonement He was to offer years later. Accepted with exemplary patience, her early sufferings strengthened her on the way of holiness. In fact, the art of becoming holy is precisely in being able to reach the ultimate goal of life by travelling the long and bitter path of suffering.

Already in this period, the saint received extraordinary mystical graces. She had a familiar relationship with Jesus accompanied by visions: “The Saviour was always present under the figure of the Crucified or the Ecce Homo, carrying His Cross; this image inspired in me so much compassion and love of suffering, that all His sufferings seemed lighter when compared them with the desire I felt to suffer in order to conform to my suffering Jesus.” Later she will say, “God has given me so much love for the Cross that I cannot live a moment without suffering; but suffering in silence, without consolation, relief or compassion; and dying with this Lord of my soul, under the weight of all kinds of insults, humiliations, oblivion and contempt.”

Her innocence must not lead us to think that Margaret Mary was perfect from the very beginning, let alone that she was a giddy and dumb doll as portrayed sometimes in sugary and inaccurate biographies. Instead, contemporary eye witnesses recount a lively and sharp girl given to entertainment, attracted by life in society and sought out by young men as a good potential bride. In short, she was a girl of her time and environment with her flaws but also with a secret desire growing inside, and a determination to attain it because Providence had chosen her for a special mission.

Seeing her penchant for religious life, the family decided to entrust her to an Ursuline convent in which a maternal cousin to whom she was very close was living. But Margaret Mary refused, giving her cousin an answer that reveals her great desire for perfection: “If I joined your convent, I would do it out of love for you; but I want to enter a convent with no relatives or acquaintances in order to be a religious exclusively for God’s sake.” That decision was prompted by the inner voice, which warned: “I do not want you there, but in Saint Mary’s,” the name of the Visitation Convent located in Paray-le-Monial.

Thus her trial period ended: she could now become a Visitation nun at the convent which Providence had destined for her. Accepted as a novice on 20 June 1671, she took the religious habit on 25 August of that year and made her solemn profession on 6 November 1672 at age 25.

From the Side Wound to the Divine Heart

As a religious, Margaret Mary seriously strived to progress in the spiritual life, believing she would fail her vocation if she did not become a saint quickly. Her courage attracted the favour of God, Who made her hear these inner words: “I am looking for a victim, wishing to sacrifice herself as a host in immolation for the fulfilment of my designs.” Having corresponded to this call, she soon received many great mystical graces.

Thus she recounts the first apparition of the Redeemer, who was preparing her for subsequent revelations: “As soon as I went to pray, Jesus presented Himself to me covered with sores, asking me to look at the gash on his sacred Side: a bottomless pit dug by an enormous arrow of love…. This is the abode of all those who love Him…. But since the entrance is small, in order to enter one must become small and strip oneself of everything.” Pointing at His wounds, Jesus spoke these harsh words: “Behold at what state My chosen people have reduced Me to, they whom I had destined to appease justice, but instead secretly persecute Me! If they do not repent, I will punish them severely. Having preserved My just ones, I will immolate all others to the fury of My wrath.”

The saint had contemplated the wound in the Side but not yet that of the Heart, so far hidden inside. That was made possible by four heavenly revelations received between December 1673 and June 1675, while she was in adoration of the Blessed Sacrament.

The promises of The Sacred Heart to St. Margarete Mary

Of the many promises Our Lord Jesus Christ did reveal to Saint Margaret Mary Alacoque in favor of souls devoted to His Sacred Heart the principal ones are as follows:

❧ I will give them all the graces necessary for their state of life.

❧ I will give peace in their families.

❧ I will console them in all their troubles.

❧ I will be their refuge in life and especially in death.

❧ I will abundantly bless all their undertakings.

❧ Sinners shall find in My Heart the source and infinite ocean of mercy.

❧ I will bless those places wherein the image of My Sacred Heart shall be exposed and venerated.

❧ I will give to priests the power to touch the most hardened hearts.

❧ Persons who propagate this devotion shall have their names eternally written in My Heart.

❧ In the excess of the mercy of My Heart, I promise you that My all powerful love will grant to all those who will receive Communion on the First Fridays, for nine consecutive months, the grace of final repentance: they will not die in my displeasure, nor without receiving the sacraments; and My Heart will be their secure refuge in that last hour.