Message from the Blessed Virgin Mary

To Her Beloved Daughter Luz De María. Given at the Shrine of Virgin of Guadalupe, D.f. Mexico. 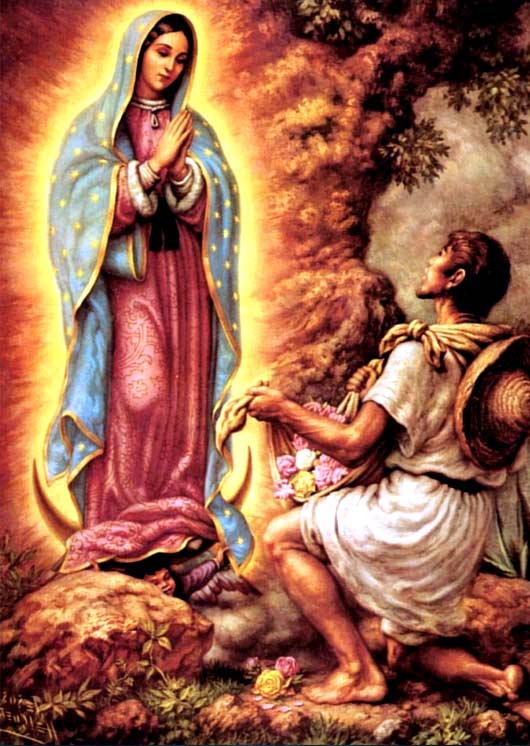 I BLESS YOU. HERE FROM THE HILL OF TEPEYAC WHERE I DWELL AS EMPRESS OF THE AMERICAS, I BLESS YOU CONSTANTLY SO THE HEART OF ALL MEN BE OBEDIENT TO THE WILL OF THE ETERNAL FATHER.

I call the meek and humble, those who remain in Unity and in Truth, they who continue preaching with their testimony, I call to them My children who abide by the Commandments.

Man must look at the Signs of this instant; they are the fulfillment of what is written. Those who do not wish to look at the Signs of this instant, is the one who remains in the desert, exposed to the inclemency of all the predators, as the sands in the desert, the same wind and the same harsh sun that leads them to fall in the face of such burden.

THE MAN WHO DOES NOT WISH TO EXPAND HIS CONSCIENCE IS LIKE THE ONE IN THE DESERT, EXPOSING HIMSELF TO EVERYTHING THE SPIRITUAL PREDATOR WILL BRING UPON HIM.

The Love of My Son has been and will remain present upon His people. His Love is infinite but His Justice is also infinite. At Calvary My Son forgave the one who recognized Him and who repented of his sins, and thus the Gates of Paradise were opened to him; but the one who mocked Him and did not ask forgiveness, to him the Gates of Paradise were not opened, and was sent to perish in its own sin.

This irrational generation has not been able to understand the magnitude of sin; sin obstructs all the blessings from the House of My Son and impedes a good harvest.

The chaff spreads among the wheat and because of that it wouldn’t be fair for the farmer to allow the chaff to spread and destroy the wheat, thus the reason that the Justice of My Son will come to this generation.

Woe to those who do not look!

Woe to those who do not listen!

Woe to those who deny the Omnipotence of My Son!

Humanity possesses instances of the Divine Wrath and they cannot deny it, since it would be like denying oxygen to the body and it continues to live. To be aware immediately after the action in concordance to the action and work of My Son, is of the brave, is of heroes.

This generation is being attacked constantly by all the advances that it possesses in this instant, it must remain firm for it not to give in to the indiscriminate attacks and in the presence of the array of false ideologies that they are constantly bombarded with.

IT IS NATURAL FOR THOSE WHO LOVE MY SON IN SPIRIT AND IN TRUTH THE FULLNESS OF THE HOLY SPIRIT, THE DISCERNMENT AND THE INEXHUASTABLE LOVE.

MAN IS ACTIVELY THE TEMPLE AND TABERNACLE OF THE HOLY SPIRIT AS LONG THAT HE REMAINS IN THE STATE OF GRACE.

Sin, more than the word sin, is the destruction and the separation of man distant from the Paternal House. It is precisely in this separation where the Church of My Son will be divided and will be weak and will fall in the hands of the infernal enemy.

Sin has existed throughout the history of humanity but no other instant has surpassed or will surpass the degree of sin living today. THAT IS WHY I CALL YOU CONSTANTLY TO BE STRICT WITH YOURSELF SO YOU WON’T BE PERMISSIBLE WITH THE ME HUMAN, WITH SELFISHNESS AND WITH VIOLENCE that will lead you to act against each other and to sin against the Holy Spirit with that unforgivable sin; he who sins against the Holy Spirit does not attain forgiveness.

My Son suffered and still suffers for the errors of this generation, errors like the relentless storm advances controlling the ignorant, defeating the weak and taking the lukewarm to be vomited by the Mouth of the Father.

Beloved children, do not forget that the war is conceived with economic purposes, and in this instant you must keep away from the mundane, away from that that will make you perish; and be obedient to the Mandates of My Son. Be the ones that will remain in the Divine Will helping those who do not know that My Son lives and still suffers by the bad actions and the bad deeds of man.

From the bowels of the Earth fire will appear.

Pray for Italy, the fury of the volcanoes will shake this My beloved land.

Pray for Mexico, it will be shaken and at the same time it will suffer from the fury of the volcanoes.

Pray for Chile, My beloved ones, it will be shaken.

All hearts will be shaken, every creature that denies My Son, since they will surrender onto the hands of those who walk amidst humanity secretly under the protection of the force of the economy of the powerful.

DO NOT FEAR MY BELOVED, THAT FROM THE HILL OF TEPEYAC, I WILL BRING TO EACH ONE OF YOU THE NECESSARY RELIEF SO YOU WON’T SUCCUMB AND NOT BE DEFEATED BY EVIL, AS LONG AS YOU REMAIN FAITHFUL.

My Beloved, you are not abandoned from the Hand of the Father, He will send His Help to His People so you won’t succumb by suffering, on the contrary, you will be strengthened so that you don’t continue under the claws of evil.

Be the hope of My Heart…

Be the ones that do not surrender...

Be the ones that do not hide under modernism to disguise the denial of My Son...

Be the faithful and brave People, the humble and meek People that believe in spirit and in truth.

When a forest is felled, it will become totally dry; and the water will not be able to make it sprout what has been felled. This is the cleverness of the demon in this instant; deny man the water of Salvation and of Purification. You must grow; you must know My Son and penetrate in His Word so not to be confused or fooled. I will not stop calling the People of My Son until the last instant and will certainly not do it now, now that you find yourself before the great suffering, the great Purification announced by Me in all of My Apparitions.

BE STRONG, I REMAIN IN YOUR PRESENCE TO TAKE YOU BY MY HAND AND INTERCEDE FOR EACH ONE OF YOU. Do not fall in the first battle; continue with the trust, the hope and the faith with the help from the Father’s House that will not leave you, since you are his beloved people.

SATAN TOGETHER WITH HIS LEGIONS IS DESTROYING MAN THROUGH IGNORANCE.

WAKE UP, KNOW EVERYTHING THAT MOVES AROUND YOU AND SINCE YOU ARE THE LOVING CHILDREN OF

YOUR FATHER, REMAIN IN HIS WILL EVEN THOUGH IT WILL SEEM TO YOU THAT YOU ARE GOING AGAINST THE FLOW OF THE WORLD.

STAY AWAY FROM IGNORANCE, BECAUSE IT IS AN ALLY OF SATAN.

Sin transforms into routine and the routine of sin is a bad custom; the children that love My Son do not act this way.

Wake up to humanity, My beloved, since in these instants if the wrath of My Son does not hurry, you will see your brothers and sisters fall on one side and the other. Remain on your feet, do not forget to pray and come to Me, through the Holy Rosary, be the same Love of My Son.

Come to Me as the Ark of the New Covenant, come to Me that I will lead you by the path of Salvation. I bless you, I love you.