The world is about to go into chaos. 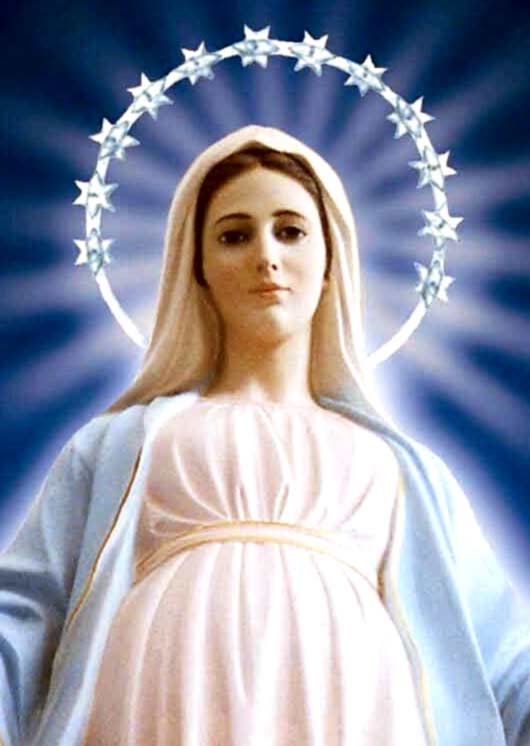 Little children, the peace of My Lord be with you, and My Motherly protection always assist you.

Little ones, the world is about to go into chaos, oh, what a suffering is falling upon this poor and pained humanity!

The immense majority of people has not wanted to accept our calls to conversion; all the events described in the Holy Word of God, for these end times, are about to be unleashed and are to take them unprepared. Millions of souls will be lost at the passage of the Divine Justice, for not wanting to accept His Mercy.

Little children, the children of darkness who handle the destiny of the nations have all planned to start the Armageddon. My adversary is impatient to make himself known and to start his last reign; be prepared little children because he is about to give his universal declaration, to announce himself as the expected messiah.

You already know, People of God that you cannot see or hear him, because he is the false messiah who comes to supplant My Son, and to attract chaos and desolation to this world. Be in alert and vigilant My little ones, because the wolves are going loose and they seek to make lost the greatest number of souls, so that when their master appears, his followers are to increase.

What a sadness I feel in My Heart of Mother, in seeing the ingratitude of the immense majority of humanity that will turn his back on my Son, to go in search of the false messiah!

Millions of souls will follow him and adore him, as if he were the same God. My children, My adversary and his followers, will unleash the greatest persecution against all that is Christian; the blood will flow and the people of God will be purified.

The blood of the martyrs will be the Blood of My Son that will start the New Church, which will be poor, simple, humble and full of the gifts and charisms of the Holy Spirit.

My children, a bacterium created in laboratories to combat pollution from oil spills, is mutating and spreading in the seas; this bacterium eats meat and it is attacking animals and humans. Be careful children with the consumption of marine foods, especially oysters and shellfish, because they may be contaminated with this bacteria; do not bathe in the sea if you are low on your immune defense system or if you have skin wounds, because through there, you can get the bacterium. This bacterium is spreading and by not fighting it, it will be a scourge to humanity.

Pray little children for the Church of My Son, because the scandals of pedophilia inside It are increasing every day. I tell you, if that is not corrected, punished, compensated and the victims apologized to, it will create a great division that together with the rebellion of many prelates, it will initiate a schism that would be the greatest in all the history of the Church of My Son.

This schism that is about to take place, will make millions of souls lose their faith; it will produce a spiritual hecatomb that will move the foundations of the Church; but it will not make it collapse, because the power of the prayer of the faithful People of God and the Divine intervention will not allow it. My adversary will take advantage of all this spiritual chaos and with the complicity of the rebellious prelates, will enter the see of Peter and occupy his throne.

Children, the days are no longer of 24 hours, if not of 16, the time will be shortened as events are to unfold; everything will reach the limit of 12 hours, time in which the Justice of God will begin. Look then, My children, because you are running out of time and many of you continue to turn their back on My Son, ignoring our calls to conversion. Awake rebellious little children once for all from your lethargy, for to continue going asleep because of sin, you are going to be lost eternally!

The last bells of Mercy are running out, the Warning is getting closer and closer; so close that It will catch you unprepared. Reconsider, rebellious children, see that the time is no longer time! What are you waiting for to return to God? The night very soon, will come and with it the Justice of God; run to put your accounts in order because the schism is approaching and if your faith is not grounded in the Word of God, many are going to be lost, because of the crisis the Church of My Son will suffer.

Again I tell you, little children, do not leave My Rosary and ask for My Holy Intercession at all times, so that you can endure the days of tribulation that are approaching.

May the peace of My Lord remain in you.

Your Mother loves you, Your Lady of Lourdes.

Let My messages be known to all humanity, my little ones.